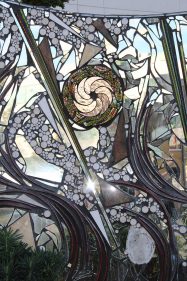 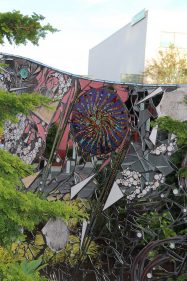 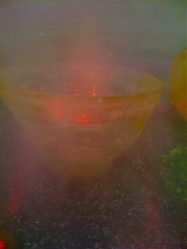 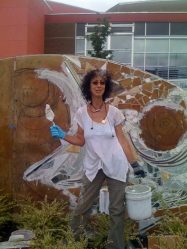 The Stardust Plaza graces the heart of downtown Everett, WA.
Embraced by the Village Theater and Kids Stage, the Plaza sets the stage for the outdoor venues of the Performing Arts Program of the city. The curving step wall is either seating or stage, and the sparkling black concrete quickly fills with chairs, with a large stage, and even a bar.

The Cauldron is a lens shaped terrazzo bowl, tipped to one side. The water spills in a perfect arc off of a cast bronze weir into the lower pool. Within the bowl are cast resin forms, filled with curiosities….frog skeletons, eagle skulls (castings), and more. The lighting is programmed for each of the rocks, so that they change color continually. The fog machine brings a cloud of magic to the Cauldron, as it drifts from the pool out to the street…

The Convergence Zone is composed of mirror shards, onyx, Carrara marble, glass cane, and plenty of grout. It shimmers, it changes continually with light reflections, and is animated with everything it can catch.. Even the traffic passing by creates a kinetic motion across the surface of the wall. At night, the colors changing within the Cauldron reflect in the wall. The installation will continue throughout the summer into fall of 2014. With a little luck from the Convergence Zone above, the wall will be nearly complete by October 2014, and an enormous celebration will be had….with the witches of Macbeth IN the Cauldron.

The Design Team created a sinuous sensuous space for all the citizens of Everett to enjoy. The children of Kid’s Stage rehearse and perform on the plaza all summer long, and Performing Arts program brings musicians to play under the wide open skies. Spontaneous Generation, a venue for quick impromptu performances, will be coming soon. Stardust…..we are all made of it. One magical summer night, with the sparkle of the concrete beneath them, someone said that they felt they were walking on Stardust…and…..aren’t we?